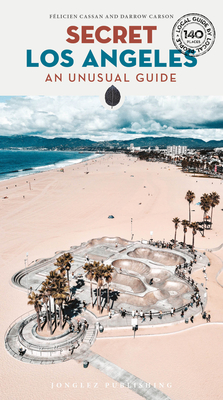 A concrete jungle surrounded by abundant nature, Los Angeles is surprisingly more than just celebrities, beaches, and theme parks. From bison in the wild, to the actual end of Route 66, an old Cold War army base, a monument to a Japanese man recognized as Righteous Among the Nations, the original Batcave, a unique statue of a shirtless Abraham Lincoln, and an abandoned Nazi camp, the L.A. urban sprawl is packed with unusual and secret treasures. Intended for everybody, visitors and locals alike, who would like to explore the city in depth, this guide seeks to dispel the misguided image of a megalopolis that is often superficially dismissed or even disliked. But it can also be read as a declaration of love for the City of Angels.

The house from the Thriller video. Abandoned missile control sites. The graves of Carole Lombard and Clark Gable… and their lovers. The steps down which Laurel and Hardy dropped a piano.

This is not your Fodor's L.A. With lots of offbeat sites - A street steeper than Lombard! Dine with cops! A fiberglass chicken! - there's something in here to interest any L.A. unbeliever.

Worth the trip? Don't know. But the book got me thinking seriously about whether L.A. could be fun, and that's a 5-star lift.